How Much Compensation Could I Claim For A Metropolitan Police Service Accident At Work? 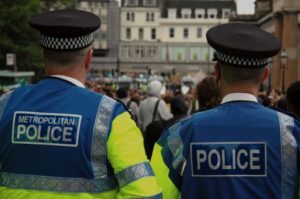 On this web page, you will find a guide to making a Metropolitan Police Service accident at work claim. It is expressly aimed at giving both current and former police officers the information they need to make informed, intelligent choices about their own claim. We cover the issues of liability and eligibility, as well as many of the kinds of claims that we can assist with. You will also find sections that cover the legal and financial considerations of such a claim.

If you have any questions that this guide does not answer, or simply need some advice about your own case, please speak to one of our claims team on 0800 073 8801. They will answer all of your questions, and inform you of your legal options, as well as how best to move forward with your claim if applicable.

A Guide To Metropolitan Police Service Accident At Work Claims

The Metropolitan Police, as of 2019, employs approximately 42,000 officers, special constables, and other police staff. This police force covers tasks such as police patrols, providing special security details (guarding civilian premises such as the houses of parliament), and takes up a significant anti-terrorist role amongst others. The force covers the entire London Metropolitan area, apart from the actual City of London, which has its own force.

This guide will discuss the process of making a claim against the Metropolitan Police, as well as how a personal injury solicitor can assist you in making your claim. It begins by giving a brief introduction to why a person may be eligible to make a claim, and how the police force could be liable to pay compensation. We then move on to specific legal considerations such as how an accident should be reported, how Health & Safety applies to the police force, and the time limit you will need to begin your claim.

The middle part of this guide gives examples of the kinds of claims that police officers may need to make against the police force. Each of these examples is covered in its own section, explaining how the claim might come about.

The final sections of this guide deal with the financial aspects of a claim. We list compensation ranges for common injuries, both physical and psychological, and also explain why the process of evaluating compensation for a police claim can sometimes differ from general personal injury claims.

We also provide a list of damages that a settlement could include. We also briefly introduce our national No Win No Fee claims service. By using this service, you can have your claim processed in a way that is financially risk-free. If you have any questions about the contents of this guide, please speak to one of our claims team today.

What Are Metropolitan Police Service Accidents At Work?

In some cases, the officer may have contributed to the cause of the accident. In this scenario, the police force still shoulders some of the blame. The legal teams representing the claimant and the defendant would then negotiate a reduced level of liability. Any settlement would be based on this lowered percentage of liability with regards to the amount of compensation offered.

How Are Police Service Accidents And Injuries Reported?

A prerequisite of making accident at work claims against the Metropolitan Police Service, is ensuring that the incident that caused harm has been reported, by following the correct process. Police regulations (Sub-clause 4 of Regulation 6) state that:

This is the basic framework for reporting workplace accidents for police officers.

Health And Safety Working For The Metropolitan Police Force

H&S checks are carried out regularly, with the intention of discovering and then mitigating any workplace health hazards. Compliance is not optional. If an officer is harmed in an incident caused by lax H&S compliance, then as long as they have followed the correct reporting procedure (outlined in the previous section), they could be eligible to make a claim for the harm they have suffered.

Time Limits To Make An Accident At Work Claim Against The Metropolitan Police Service?

The general personal injury claims time limit of three-years applies to police officers that have suffered harm at work. For currently serving officers, this will be three years from the date the incident that caused them harm took place. For officers who have left the force or retired, this would be three years from the date that a medical condition caused by an on the job health hazard is diagnosed.

However, in some special cases, this time limit can differ. We recommend you speak to one of our claim advisers, to check which time limit would be applicable in your own case.

Many police officers regularly face risks during their working day, especially those in a public facing role of some kind. These risks could, if not managed effectively, lead to injuries that are the seed of personal injury claims against the Metropolitan Police Service. Examples of these risks include:

We will cover several of these kinds of risks in more detail in the sections below.

Compensation If Assaulted Working For The Police

Any officer on duty, civilian working with the force, or volunteer assisting the force, could be eligible for compensation if they are assaulted while carrying out their duties. However, it must be shown that the force was to blame in some way, for example:

The police force is required to provide all officers, volunteers and civilian staff with adequate training to carry out their duties safely. This is a legal obligation that is tied into the Health & Safety compliance process. Furthermore, no officer can be asked to undertake a task for which they have not been trained and received certification. For example, an officer without the proper firearms training, cannot be sent out as part of an armed response unit. If an officer is exposed to risk due to insufficient training, or being given a task they have not been trained in, this could be seen as police negligence, and a reason to make a claim could exist.

The police force is, as part of the entire Health & Safety compliance issue, required, by law, to provide officers with personal protective equipment where appropriate. This equipment must be:

If the equipment does not fulfil all of these requirements, and this leads to an officer coming to harm, they could be able to claim police officer compensation.

All police officers who are expected, as part of their duties, to drive a patrol car or other vehicle, receive extensive training in advanced driving techniques. Yet despite this, due to the often-dangerous nature of the job, road traffic accidents involving a police vehicle can and do happen. They can be caused by risks such as:

No matter how the RTA happens, if it can be proven that the root cause of the accident lays with the police for itself, it could be possible for the injured parties to make personal injury claims.

Ways You Could Be Injured Working For The Metropolitan Police Service

In a prior section, we covered many of the risks that a police officer can face in the line of duty. This section looks at the kinds of injuries these risks could result in, that could lead to a claim for compensation for police officers injured on duty. These injuries could include:

You could try to use an online injury claim calculator to get a rough idea of how much you could be able to claim. You can also use this table below, which has been created based upon the UK judicial guidelines for compensation.

However, what a personal injury claims calculator won’t tell you, is that in some cases, compensation for retired police officers is calculated differently. Under the Police Injury Benefit Regulations 2006, when an officer is forced to retire due to ill health caused by their job, after 30 to 45 years of service, they can be awarded an annual gratuity on top of their pension. This gratuity can be as much as £16,000 per year.

Financial Losses You Could Claim Compensation For

When a personal injury lawyer succeeds in processing your claim, the settlement that you are offered will be made up with different kind of damages, such as:

If you would like to know what kinds of damages might apply in your own case, please speak to one of our claim advisers.

There is no financial risk at all when you use our No Win No Fee claims service to have your claim processed. We don’t charge to take on a new claim, and we don’t charge as we are processing a claim. We also don’t charge if we fail to get you any compensation at all. You do pay a fee if your claim is successful known as a ‘success fee’, and we will deduct our fee from the money we have received on your behalf, before sending you the rest.

How Our Team Could Help You

If you are a police officer who has suffered an injury on duty, we could be able to help you to make a claim. We always try and get you the most compensation we can, and do everything possible to ensure that your claim is a success. We are always available to answer any questions you may have, or to update you on the status of your claim.

Have you been injured while working for the Metropolitan Police Force? Do you believe that you have a valid reason to make a personal injury claim against the force? If so, speak to one of our claim advisers on 0800 073 8801 today. They will be able to give you some free legal advice on how to get your claim started, once they know a little about your case.

You may find these external links to be of use:

You could also find these additional guides useful:

How to claim for police negligence

A guide to PTSD claims