This is a case study which we have researched. In this case study we look at a compensation claim made against one of the UK’s largest and most prominent children hospitals, Great Ormond Street Hospital, often known as GOSH. We have researched this case study to illustrate the role that an expert personal injury solicitor can play in securing a compensation payout for a heart attack and brain damage. Any names and specific details of the claim have been altered to protect the identity of the parties involved

At the time the claim reached the High Court the woman involved was in her 20’s. The incident which compensation was being claimed for had occurred 14 years earlier. Whilst she had been born with a a level of disability, this had been made much worse due to alleged medical negligence she experienced during her care at Great Ormond Street Hospital as a child. This has resulted in her becoming brain damaged and being very incapacitated.

Whilst the claimant had been born with a degree of cerebral palsy, she had been making good progress thanks to the efforts of her parents and family, as well as that of the hospital. The claimant had been left unable to perform a range of simple everyday tasks. The hospital did acknowledge their role in the injury sustained, though the case needed to progress through the courts to be fully resolved. During the High court case the hospital was found to be at fault and damages were awarded. The medical negligence compensation payout consisted on a lump sum payment as well as additional six figure annual payments to help cover the costs of care needed.

Accident Claims UK can offer you no win no fee solicitors who can help you to make a successful compensation claim. Accident Claims UK are both a firm of solicitors as well as having built one of the UK largest and most comprehensive resources for advice on personal injury claims. If after reading this case study you wish to make a compensation claim, contact us using the methods at the bottom of this page.

Statistics Showing The Rate Of Medical Negligence In The UK

Surgical and medical negligence in the UK

In the table below, we can see the number of new cases of medical negligence claims peaked in 2010/ 2011 before dropping in the last few years. 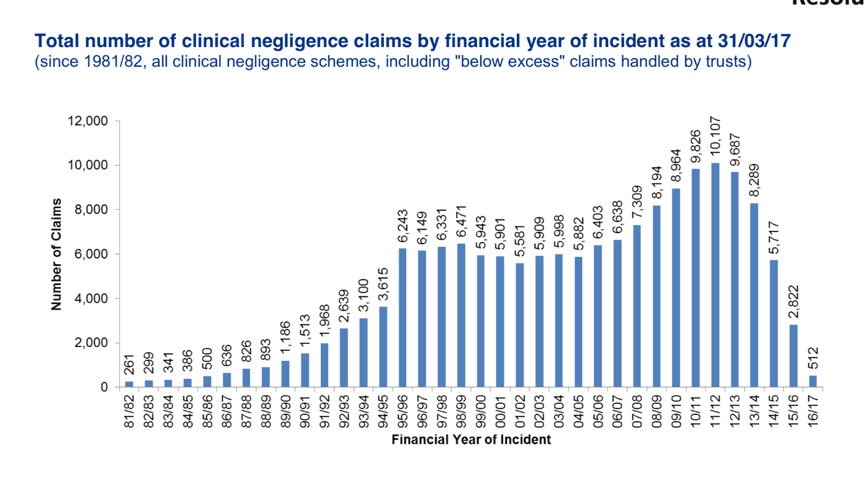 How Did The Heart Attack Lead To Brain Damage?

In this case there were a combination of factors which led to the claimant having the level of injury which she did. The compensation payout for a heart attack took these into account. The personal injury claim detailed that the claimant did have cerebral palsy at the time of the clinical negligence. It also detailed how she was doing well. At this point the claimant was said to be intelligent and lively. Personal injury solicitors acting on behalf of the claimant alleged that staff at the hospital did not have the correct equipment necessary to provide treatment when the claimant had a heart attack. This lack of having the proper equipment to hand, and the resulting delay in getting treatment, was the cited as the cause of the injuries resulting from the medical negligence during the heart attack. This delay caused extra time to be taken in resuscitating the claimant. As such she suffered brain damage due to lack of oxygen.

Following the accident, the claimant was said to have undergone the following changes. She was now registered blind. She was also unable to voluntarily move her arms or legs, where she had had a degree of control before. She was also unable to eat or drink orally. The woman affected also found communicating very difficult. The result of the injury had erased the progress which she had been making thanks to her parents efforts.

How Did The Case Progress?

Whilst the management of the hospital responsible for the negligent care have apologised to the parents of the young woman affected, the incident was described by a judge at the High Court as a failure at the institutional level. The personal injury lawyer and solicitor for the defendant and her family agreed to the settlement package which was offered by the hospital.

The main allegation made in the heart problems compensation claim was that not having the right equipment caused a delay in treatment, a resulting lack of oxygen, and brain damage. Judges cited this as a breach in duty of care which was admitted by the hospital. The hospital did write a letter of apology to the claimants parents. Whilst the claim did have to be settled a the High Courts, where compensation was awarded, the hospital trust did state that they were glad that the parties had reached a settlement in the matter. The hospital trust also praised the level of care which was provided by the parents to the young woman in the case.

The Case Went To Court, What Settlement Was Awarded?

In this case for the compensation payout for a heart attack leading to brain damage being agreed upon, the case had to go to court and reached the High Court before a settlement was agreed upon by the two parties. Whilst most cases of personal injury claims can be settled between the two parties without the need to go to court, in some cases it is necessary for them to do so. This can be where the defendant does not admit liability for the claimants accident and resulting injury, or, it can be where the parties agree liability but can not agree upon the settlement.

In this case the claim needed to go to court for the settlement payout to be agreed upon. After reviewing the claim the justice of the court determined that the claimant should receive a lump sum payment of over £1 million pounds. The court also awarded continuing payments of £150,000 or more per annum. This annual payment was set to meet the costs of her ongoing care in the home and medical expenses. Whilst the settlement and ongoing payments are quite large, they are designed to meet the expected costs of her medical treatments.

There are many reasons why people choose not to claim a compensation payout for a heart attack or other injury leading to brain damage. One of the most common things which causes people not to make a compensation claim is the worry about how much it will cost to do so and how much they will or may need to pay to retain the solicitors services. In the past this stopped many people using personal injury lawyers. However today Accident Claims UK are happy to offer many of our clients services with a no win no fee solicitor.

A no win no fee solicitor will work with you through a conditional fee contract. This agreement will set out in detail what services will be provided and work done by the solicitor. It will also set out the conditions on which they will be paid. These will include when and how they will be paid, such as upon successful completion of the case and as a fee charged against the settlement. The agreement will show that no charges will be sent to the claimant until such time as the case is successfully resolved. It should clearly state that if you are not awarded compensation, you will not be liable for any charges.

The solicitor is assuming any risk in the case instead of the claimant, in that if they can not secure a payout, they will not be paid themselves. If you are offered such an agreement, it means the solicitor has a very high level of confidence in securing you compensation. You can find out more about making a claim with us here.

When you are ready to make your claim your next step is to reach out and contact our specialist team. At Accident Claims UK we are 24 hours a day, every day to answer your calls. You can also reach our team by sending us an email, using the online support facility on our site, or by filling in a contact form to request a call back. Which ever way you choose to get in touch with us, we are ready to help you today.

If you wish to find out more about the injuries suffered by the claimant in this case, as well as finding out how to make a successful compensation claim, please view the resources below.

Child Accident And Injury Claims
If your child suffers an injury due to someone else’s actions you may need to make a compensation claim on their behalf. Find out how the process of doing so works in this guide.

Litigation Friends
In order to make a claim on behalf of a child you need to meet certain criteria to be considered a litigation friend. Find out how to meet these requirements in this UK Government guide.

Clinical And Medical Negligence Claims
Clinical negligence does not just happen to children, it can also happen to people at any stage of their life. Find out more about getting compensation after negligent clinical or medical treatment here.