This case study on racial discrimination in the workplace focuses on a Jamaican army chef who was serving in the Welsh guard near Buckingham Palace. He had worked in the army for 5 years at a £22,000 a year job which he had begun in 2008. The soldier was subject to racial abuse throughout his time in the job.

Other, more senior members of staff called him racist names, and made racist comments about him and other black colleagues whilst in his presence. He was also punched on one occasion. The soldier and his family, including two young children, were also subjected to a frightening and humiliating attack where they were locked into their army quarters and the door was super glued shut.

As a result of this attack, the family felt that they were forced to move out of the army quarters. The soldier claimed that the racial abuse took place whilst other superiors were present in the room, and that these superiors did nothing to try and halt the abuse.

In an out of court settlement the Ministry of Defence accepted the claim, and made a payment of £22,000 to the claimant in damages to compensate him for the emotional trauma he suffered as a result of the ongoing abuse.

Racial abuse and racial discrimination is sadly, not uncommon in the workplace. If you have been the victim of racial discrimination or abuse, please read on to find out more about what you can claim. If you wish to find out more, or to go ahead and make your claim, speak to Accident Claims UK today. Our team of experts will help you to bring a case to claim compensation as a result of racial harassment in the workplace against a third party.

Race Relations In The British Army

The race relations policy of the British Army has come under significant criticism during the past decade or so. A large number of racism claims have come to light both as a result of physical and verbal abuse, and also with regard to the recruitment process. This is due to the fact that recruitment to the armed forces is woefully low for ethnic minorities.

However, the army has been taking steps to both face up to the problem, and to put policies in place to address it. The Ministry of Defence stand by their core value that soldiers should have respect for others and as such, assert that there is no place in the army for racism, extremists or intolerant views.

The army have experienced significant political pressure as well as pressure from race organisations and the media to tackle the problem of racial discrimination. However, confidence in the British Army’s policy on racial discrimination is still low. Academic literature suggests that the army has a long way to go in order to build confidence in their equal opportunities policy.

What Is Racism In The Workplace 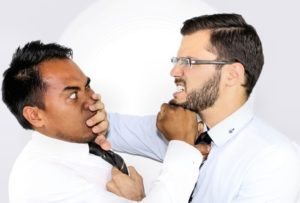 Racism is defined as an act of unfavourable treatment that is carried out due to prejudice on the basis of religion or race. In the eyes of the law, you are considered a victim of racism even if the perpetrator has incorrectly assumed your racial group. You can also be the victim of racism if hostility arises due to your partner’s race or religion.

Types of abuse that could be interpreted as racist include physical or verbal bullying and abuse, threats, online threats of abuse or damage to an individual’s property. Racist attacks can be isolated, or part of an ongoing pattern of harassment.

Racist attacks can be initiated by strangers or people you know well. Whatever kind of racism you have faced, you may be able to claim compensation for your suffering.

It is unlawful for your employer to act in a discriminatory manner as a result of your race. This is a hard and fast rule and it applies to all employees, no matter how large or small the organisation. Discrimination covers a variety of areas and includes the following:

Sadly, statistics indicate that racism and racial discrimination at work is still a huge problem. Black people are paid 8.3% less than their white counterparts, and are more likely to have a temporary or zero hours contract. It is also worth noting that 37% of black, Asian and minority ethnic (BME) people, claim to have experienced hostile or prejudicial treatment at work.

What Racial Abuse Did The Claimant Experience?

In this case study a Jamaican army chef was called racist names by a Lance Corporal whilst serving in the Welsh guard. The claimant alleged that he was racially abused verbally on a regular basis, and was punched on one occasion. He claims that senior officers who were witness to the abuse did nothing to stop it. On another occasion he claimed that officers locked him and his family in their army quarters and super glued the door shut. As a result, the claimant and his family felt that they were forced to move home.

The claimant also felt that he was forced to leave his job after 5 years as a result of the abuse. The claimant had never experienced abuse such as this before he joined the army.

What Happened During The Case?

The claimant alleges that he was racially abused on a regular basis and physically assaulted on one occasion. The Ministry of Defence accepted and recognised the claims of harassment and discrimination as such, a settlement was reached out of court. The Ministry of Defence stated that there is no place for harassment or discrimination in the armed forces.

How Was The Racial Abuse Claim Settled?

The claimant received an award of £22,202 in compensation. Here is the breakdown:

No Win No Fee Racial Abuse And Harassment Claims

Here at Accident Claims we work on Conditional Fee Agreement (No Win No Fee). We believe that offering a No Win No Fee service takes a significant amount of stress away from the claimant during what is sure to be a difficult and traumatic time.

No Win No Fee terms removes the financial burden from your decision to make a claim because you will not be asked to pay any costs upfront. If your case is unsuccessful, you won’t be required to a penny. When you do receive compensation, our fee will be taken from your pay out.

As a consequence, the solicitors we offer only take on cases they feel sure that they can win. We are a highly regarded No Win No Fee solicitor firm, and have many years’ experience in judging whether or not a personal injury claim could be successful.

Talk To Our Team Today

Here at Accident Claims we have a team of staff including a panel of highly experienced personal injury lawyers who boast a high level of expertise in the area of personal injury compensation. Not only do we have a great success rate, but we differentiate ourselves from competitors due to the fact that we also have a great track record of caring for clients.

We understand that you are going through a very difficult time and we do everything we can to take the burden of stress away from you. We are always here on the end of a phone to advise and support you through your difficult journey.

If you have a racial discrimination at work claim to make, then please call us at Accident Claims today on 0800 073 8801 or email us at office@accidentclaims.co.uk. Alternatively, you can use our online form which can be accessed via our website.

Stress in the workplace – Your claims guide – Stress, if not managed properly can lead to compensation claims. Find out if you have one here.

Have you been targeted by racism? – More advice on if you have been subjected to racial abuse at work.

Handling racism in the workplace – ACAS have produced a page about this important topic. It would make interesting reading for anyone involved with a workplace that has, or could experience racism. There are key points for employers to read in a separate downloadable PDF.