A compensation for a broken metatarsal case was settled at £45,000 when a construction worker suffered a foot injury at work that led to his metatarsals being crushed. 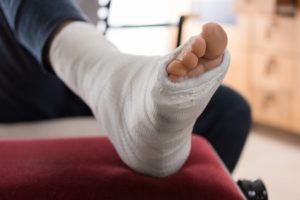 The gentleman, who was working on a digger when the accident at work occurred, had left the cab to start loading some tools into the digger’s bucket, when the digger was hit by a forklift truck on the site, which then caused the digger’s bucket to drop onto the gentleman’s foot. The developers for the site as well as the forklift driver were thought to be at fault and so the claim was made against them.

The metatarsal break victim was forced to have time off work after medical test showed he had fractured the necks of 2nd-5th metatarsals, as well as lacerations and fractures to other parts of the foot.

The foot was cleaned and the victim underwent broken metatarsal treatment while he was under general anaesthesia, and eventually the toes were fixed with a procedure involving wire.

The victim, who suffered metatarsal foot pain that was deemed to be quite severe, was then required to have further treatment to get rid of tissue that had died, and as a result, spent almost six months away from work, after which he was unable to carry out his usual duties due to the injury. It was claimed that he also suffered from depression as well as having panic attacks.

While this compensation for a broken metatarsal case was a case study done by Accident Claims UK, we can. We can provide specialists no win no fee solicitors that have experience in this type of injury and that can give you compensation guidelines for personal injury you have suffered, so that you can see what your claim could be worth.

How Common Are Broken Metatarsal Injuries in The Workplace?

Health and safety executive have reported that every year approximately 64,000 workers on construction sites in the UK have sustained some sort of injury in the workplace. This has led to many people having had to have been off work for some time. Over 20% of the cases reported have led to an absence from the workplace of over a week. These figures detail that almost 3% of construction sector workers are injured within in the UK while they are at work.

Although the statistics do not take into account broken metatarsals specifically, it is very clear that this is a common injury for people that have to do any kind of lifting or handling, and are working near machinery that could crush the foot. This is why construction workers are highly at risk of this kind of injury happening.

What Injuries Did The Claimant Suffer In This Case?

It is important that you understand what a broken metatarsal is actually are before we explain the injuries in more detail. A fracture occurs if the long bones of the middle of the foot are either cracked or otherwise broken – these are known as the metatarsals. A broken metatarsal can happen in a number of different ways. They can be caused by an acute injury (which includes being hit by something, or by something that falls on the foot or by kicking something), or can happen due to repeated stress being put on the foot. A direct injury is what has happened in this case, but what a broken metatarsal can also be caused by is a twisting injury within the foots or a hard landing from a jump.

Injuries that was offered by the victim in this case were quite severe. As previously mentioned, the next of the second to fifth metatarsals, the third metatarsal’s shaft as well as the proximal phalanx on the big toe were are all subject to fracture. Additionally, various curt were also found on the foot. This led the victim to have to you undergo various treatments not only to clean the open fractures, but also to remove any dead tissue, as well as having a fixation by wire of the fractures. Victim’s mental injuries that were caused by this where mild PTSD that was said to be partly due to the accident that occurred.

What Allegation Was Made And How Was Liability Established?

In this case, liability was against the site’s developers, who were deemed to have responsibility for both the driver and the forklift truck that had caused the incident to happen, and for the injury to have happened. Because of the seriousness of the victim’s injuries, and the fact that medical prognosis would likely be sometime in coming, an interim compensation payout of 7.5 thousand pounds was decided upon. This was supposed to be in compensation for the income lost by the victim.

How Much Compensation Was Awarded In This Case

The damages awarded for this compensation for broken metatarsal case, included a variety of different awards. The total amount secure for the victim was 45 and a half thousand pounds, and this included:

The likelihood is, in many broken metatarsal claims, that there will be varying degrees of payout for each and every one of the categories above. Therefore, the amount of broken metatarsal injury compensation that you would receive for your injury would be likely to vary from the amounts above. Our friendly and helpful team will be able to help ascertain how much you would likely be able to claim in each of these categories, after an initial consultation. Of course, this consultation is free of charge and does not lead to any obligation to use our services.

If you have suffered an injury such as the case study above, or one that is worse or less serious than that which was detailed above, you are likely to have had to spend at least a little time away from your place of work. This is more than likely will have caused you some financial hardship, and this is why many people fear that they will not be able to make a claim; because they do not have the funds available. Not paying upfront for any legal fees is more common than you would think. No Win No Fee arrangements can be provided to you by the solicitors we provide. What this means for you is that taking a claim forward will not cost you anything upfront. It also means but if you are not awarded any compensation for your broken metatarsal, you will not have a hefty legal bill to pay.

In fact, you will not have to pay legal fees at all. We do understand that you probably have some questions about how this can be done, and we’re happy to explain this. Basically, a percentage of your compensation, which will be explained to you prior to you agreeing to it, will be used to fund your legal fees. We can go over this in more detail over the phone if you would prefer.

There really is no need to suffer any longer without compensation for a broken metatarsal. Here at Accident Claims UK, we can assist by first assessing your validity to claim, and then providing you with an experienced and dedicated solicitor who will be able to take your claim to a successful conclusion. We have dealt with many cases such as this before and you can be assured that we will provide a level of service you will not be disappointed with. Many of our previous clients have left testimonials to this effect, so why not get in touch two letters help you get compensation for a broken metatarsal, or indeed, any other injury that may have happened to you. 0800 073 8801 connects you directly with I legally trained member of our team. We’re waiting to take your call.

What could be included in personal injury claims payouts for a broken metatarsal?

Largely, personal injury compensation payouts in the UK could include more than one type of damages. Commonly, you could claim:

General damages – this type of damages could compensate a claimant for their pain and suffering as well as their loss of amenity caused by their injuries. You would need to ensure you submitted strong medical evidence to maximise your settlement amounts for your injuries. This medical evidence would need to come from an independent source. Therefore, you would need to attend a medical assessment appointment with an independent medic. Upon examining you, they would compile a medical report that evidenced your injuries and your long term prognosis.

Should you use a compensation calculator to get guidance on personal injury claims payouts for a broken metatarsal?

If you see a compensation calculator online, you might be tempted to use it to get an idea of how much your payout could be. However, we should make you aware that this would not give you an accurate compensation settlement amount. There is no online tool that could accurately predict a compensation payout as it wouldn’t be able to ascertain all the facts and unique complexities of your case. Instead, if you want to get an idea of how much compensation could be appropriate for your claim, why not speak to our team. We could talk you through how claims are calculated in more detail. We could even provide you with a No Win No Fee personal injury lawyer, who would be authorised and regulated by the Solicitors Regulation Authority. They could help you fight for the maximum settlement amount possible for your claim.

Should you use a local lawyer to get guidance on personal injury claims payouts for a broken metatarsal?

Using a lawyer to make a compensation claim could be considered a sensible decision. After all, a lawyer could bring all their legal knowledge and expertise to your case when fight for a compensation settlement. You may be rather surprised, however, to find that you wouldn’t need to choose a local lawyer. You could go for a solicitor that is based anywhere in the UK to make your claim.

How often are broken metatarsal injuries the result of car accidents?

Unfortunately, we do not have figures relating to how many broken metatarsal injuries are caused by car accidents in the UK. However, there have been many car accident casualties, even in 2020 when there was four months in which the UK was in lockdown. You can see how many casualties of each road user type there were in the graph below. 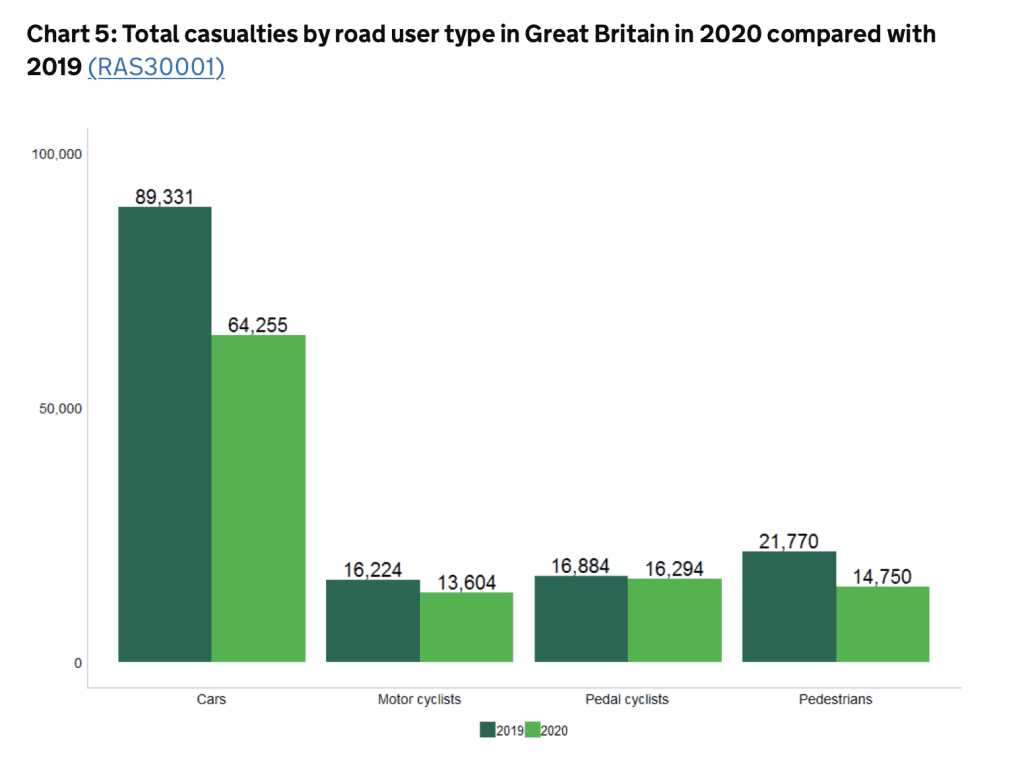 We do hope that this page has proved useful for you, but we also know that sometimes she would prefer to do a little extra reading and research for yourself before calling us. The links below may well provide some more detail you might find interesting.

Foot pain NHS – This page explains more about the injury and how it is treated. It explains about fixes such as fusion surgery, open reduction internal fixation surgery, and other fixes of a metatarsal fracture.

Work Claims for Injuries – The Accident Claims guide on work claims for injuries gives more guidance on claiming against an employer.

Thank you for reading this guide to personal injury claims payouts for a broken metatarsal. No matter what injury to the bones of the foot you’ve suffered, whether you’ve experienced crush injuries, a broken foot and ankle or a metatarsal fracture, we could help you. A personal injury case for someone who has suffered a fractured metatarsal could bring you a significant amount of compensation.