In this unusual case study, we are going to look at the case of a family who won £90,000 in MMR vaccination compensation. The case concerned 18 year old Mr F who received an MMR vaccine (a vaccination against measles, mumps and rubella) when he was 13 months old. Prior to the vaccine, he was a healthy boy, who seemed to be developing normally. Ten days after the immunisation, Mr F experienced a major epileptic seizure, which left him seriously brain damaged.. As well as becoming epileptic, Mr F’s brain damage caused him to become severely disabled, becoming unable to stand unaided, eat unaided, could only speak a very limited number of words and suffered from severe learning difficulties. He is also incontinent because of his disability.

For Mr F’s parents this claim was the end of a thirteen year battle to win MMR vaccination compensation for their son. They had initially applied for a vaccine damage payment on behalf of their young son in 1997 from the government’s Vaccine Damage Payment scheme. Unfortunately, the claim was rejected because it could not be proven beyond reasonable doubt that their son’s epilepsy and disabilities was caused by the MMR vaccine. This scheme has since been disbanded.

What Are The Risks Surrounding The MMR Vaccine?

Sadly there is a lot of misleading information about the MMR vaccine in the media and online, much of which has been spread by anti-vaccine pressure groups and activists. Therefore it is very important that we look at the potential risks and side effects of vaccines objectively. 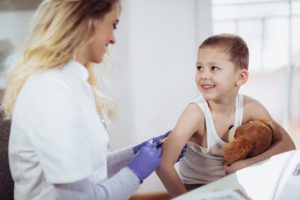 According to the NHS in Britain, there are some side effects to the MMR vaccine. Firstly, some children will experience a mild form of measles, which will result in a high temperature, loss of appetite, general feelings of unwellness and a rash. This may last 2-3 days. 1 in 50 children will develop a mild form of mumps after experiencing the MMR vaccine, which involves a swelling of the cheeks and jaw and should only last a day or two. Some adult women who receive the MMR vaccine also experience joint stiffness, which can last 2-3 days. Unfortunately the NHS does acknowledge that there are some rarer side effects from the MMR vaccine.1 in 24,000 cases will develop a rash of bruise like spots known as idiopathic thrombocytopenic purpura (ITP). These will usually be gone within two weeks.

Controversy has surrounded the MMR vaccine since Dr Andrew Wakefield published a paper in The Lancet journal linking the MMR vaccine to autism and bowel disease. The results of these findings were widely discredited and there has been no evidence to prove that the MMR vaccine can cause autism or bowel disease. (Please remember as well that Mr F, the subject of this case study, is not autistic). Dr Andrew Wakefield has since been struck off the medical register. What’s more, measles, mumps and rubella are highly infectious diseases with extreme symptoms such as meningitis and encephalitis, as well as cause children to go deaf. These illnesses can also cause pregnant women to miscarry their unborn baby. Since the vaccine was introduced, diseases it prevents have become rare, but it is important to get your children immunised to protect them from exposure to the disease and also to help prevent these diseases from spreading across the general population.

What Were The Alleged Effects Of The Vaccine On The Claimant?

As we have said, the vaccine caused a 13 month old Mr F to have a serious seizure which left him with severe brain damage. As a result mr F suffered from epilepsy, was unable to walk or stand unassisted, suffered from learning difficulties, impaired speech and could not eat on his own. He now needed at home care, which his parents had to provide him. This affected their ability to work and earn a living. As we have already mentioned, Mr F’s parent’s originally applied for compensation from the Vaccine Damage Payment scheme and lost their claim for vaccine injury compensation. They eventually won their claim for MMR vaccination compensation in 2010, after several appeals.

About The Vaccination Injury Compensation Claim

The hearing was a very delicate matter. It was chaired by a barrister sitting with two consultant doctors. One of the doctors on the board for the vaccine compensation claim did not believe that the vaccine directly caused Mr F’s epilepsy and disabilities. Instead, she judged that young Mr F may have been born with a genetic predisposition to epilepsy, and would have developed the condition anyway. But he was overruled by his two colleagues. The advisory board gave this final comment of warning: “We would stress that this decision is fact-specific and it should not be seen as a precedent for any other case. In particular, it has no relevance to the issue… as to whether there is a link between the MMR vaccine and autism.”

Mr F’s parents were awarded £90,000 in damages on Mr F’s behalf. This vaccine injury compensation amount may seem like a lot of money, but please consider that given the severity of Mr F’s disability and the time his mother and father have devoted to his care, it is a small price for the Defendant to have to pay. His mother said that the money will mostly go towards paying for Mr F’s care.

If you or your child has been injured due to a vaccine, such as suffering an extreme reaction to a vaccine then suffering from an injury, illness or disability as a result then you could be entitled to make a vaccine compensation claim. Your vaccine damage payment could be worth tens or even hundreds of thousands of pounds, which will go towards getting you or your child the best possible medical care that is needed. Accident Claims UK offers all of our clients the option to make a no win no fee claim. Your no win no fee solicitor will not charge you an upfront fee and you will only have to pay your fee if you win your claim. So there is no financial risk to you. To enquire about making a no win no fee claim, call us today to talk about your circumstances. If you have legitimate grounds to claim then we will put you through to the right no win no fee solicitor.

Do you think you or your child could be owed a vaccine damage payment for injuries caused by the MMR vaccine, or any other vaccine? Speak to Accident Claims UK today. We offer a free, no obligation consultation to anyone looking to make a vaccine compensation claim. Our friendly advisors are trained to speak to you knowledgeably and with sensitivity. You can discuss the circumstances of your vaccine injury compensation claim and if we think you are entitled to a vaccine damage payment we will provide you with an excellent personal injury lawyer to help you make your claim. What’s more, we will estimate how much vaccine injury compensation your claim could be worth.

Clinical And Medical Negligence Claims Guide, How To Claim The Compensation
How to make a claim for an injury or harm caused through clinical negligence.