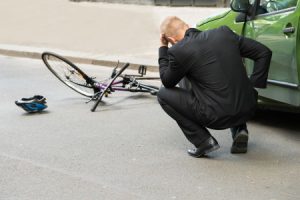 According to the most recent figures from the Department of Transport, the number of pedal cyclists killed, or seriously injured in Great Britain has risen by 29% during 2008 to 2018.  A total of 17,527 pedal cyclist casualties of varying severity was recorded in 2018 alone.

The accidents responsible for some of these casualties can vary greatly but one possible cause could be an accident commonly referred to as dooring. You may ask, “What is dooring a cyclist?” This is when a cyclist collides with a car door that was opened by a passenger or driver who failed to check to see if the road was clear.

All road users are bound by the Road Traffic Act 1991, which sets out the legal parameters for using the road. It stipulates that all road users are required to obey the rules of the road which includes to use the road with due diligence, and to use the road in a way which does not puts other road users in danger which also applies to those occupying vehicles who must ensure the way is clear before opening doors out onto a road.

If you have been hit by a car door because a passenger or driver of a vehicle failed to check the road was clear, you could be entitled to make a claim for compensation.

You may have questions about the rules surrounding this type of accident which could include the following:

This guide provides information on making claim when you have been hit by a car door while cycling and provides an explanation regarding dooring, how you could be entitled to make a claim, information that outlines what you could claim for, and how much you might receive in compensation.

Dooring claims are also subject to a time limit of three years which applies to most cases. As such, Accident Claims UK recommends getting in touch with us as soon as you consider making a claim. Even if you are not sure how long it has been, contact us today.

A Guide To Claims For Cyclists Hit By A Car Door

It is common for people to ask, “What is dooring a cyclist?” When a cyclist is hit by a car door because a passenger, or driver fails to check if the way is clear, this is referred to as dooring. It is possible to claim for injuries resulting from this type of accident if there is evidence that your injuries were caused by the negligence of the passenger, or driver who opened the door.

If a cyclist comes into contact with a car door that is suddenly opened, they could sustain injuries of varying severity, depending on the speed they were travelling, and nature of the impact. Injuries can also be caused if a cyclist is forced to avoid a car door that opens ahead of them, which results in them facing oncoming traffic, or it could cause a collision with a stationary object. A cyclist may even off their bike.

This guide contains information you may find useful if you sustained injuries because of an car door opening while you were cycling, and what to do if this happens to you. Filing a cyclist dooring claim can be complex but a personal injury lawyer from our team would guide you through the steps required. They would ensure that the compensation yo may be awarded for the pain and suffering caused by the accident is fair. Contact our helpful advisers today for more information on how to begin your personal injury claim.

What Are Dooring Accidents?

What is dooring a cyclist? As we have outlined above, a dooring accident happens when a passenger, or driver of a vehicle fail to check if the road is clear before getting out of a vehicle which results in a person on a bike being hit by a car door, or swerving to avoid it which leads them into harm’s way.

There is a section in the Road Vehicles (Construction and Use) Regulations 1986 that states that a road user should not injure, or endanger other road users by opening the door of a vehicle on a road.

For example, a dooring accident could involve the following:

Should any of the above occur, the driver, or passenger has committed an offence by endangering the cyclist, or any other road users by negligently opening a door onto a road. The penalties for this include a £1000 fine if they are found guilty of endangering another road user. It may be possible to claim against the negligent third party if you have been hit by a car door, or forced to swerve to avoid one while cycling, which caused you harm.

Who Is At Fault If A Bicycle Is Hit By A Vehicle Door?

Although the concept of what dooring a cyclist is recognised by many road users, there are some people who may question who might be responsible for the accident. The question around dooring in the UK asks if the cyclist is at fault for an accident involving a collision with an open door, or if the person who opened the door could be held liable.

It may be possible in some cases for there to be split liability if a cyclist is hit by a car door. This means that both the cyclist and the person who opened the door could be held responsible for what happened. Even in cases of split liability, it is still possible to make a claim. If you were hit by a car door while cycling and developed injuries as result, contact us today and we could help determine if you have valid grounds to proceed with a claim against a negligent third party.

Liability When A Cyclist Is Hit By A Car Door

As detailed above, determining liability for who is responsible for a collision with an open car door in the UK, can vary from case to case. Despite this, the law on opening a car door, section 105 of the Road Vehicles (Construction and Use) Regulations states:

This creates the precedence that liability could lie with a driver, or passenger who was negligent when opening a door which caused injury, or harm to a cyclist, or other road user. A driver is responsible for their passenger as well as themselves, and is legally required to ensure that the way is clear. If they fail to do this and cause harm to a road user, they could be charged with committing an offence.

From this perspective, you could pursue a claim against them. As mentioned above, if there is partial blame on both sides, your compensation amount would be adjusted to reflect this but you could still make a valid claim to compensate you for your injuries.

If you are unsure who may be at fault for your dooring accident, we recommend that you contact our advisers today. They have the necessary expertise and could help you decide if your circumstances justify making a claim.

According to the most recent figures released by the Department of Transport, there was an increase in the number of people pedal cycling on the road in recent years which rose by 17% between 2008 and 2018. The department states that this may have a link to the increase of 29% in casualties on British roads between 2008 and 2018.

Outlined in the Department Of Transport Data Set RAS30065, the overall casualties for 2018 stood at 17,550 reported cases. These casualties include deaths and injuries of varying severity. In fact, there were 3,707 serious injuries reported, 13,744 slight injuries and 99 deaths in total for 2018. The casualties were caused by a wide range of accidents on the road, and show that cyclists are increasingly involved in collisions and incidents on British roads.

Vehicle doors being opened or closed negligently were also a contributing factor to accidents on the road involving all road users, and in the RAS50001 Data Set, it stated there were a total of 297 casualties caused as a result of vehicles doors opened into a road. Of these causalities, there were 214 minor injuries, 81 serious injuries and 2 deaths.

Even though there was a 4% decrease in cyclist casualties between 2017 and 2018, the number of cyclists injured, or killed on British roads is still be regarded as quite high.

Injury Claims Calculator For A Cyclist Hit By A Car Door

In this section, we have included a personal injury compensation table to illustrate some of the typical rates awarded for certain injury claims. There is a wide variety of possible injuries that could occur if you are hit by a door as a cyclist. As such, the circumstances can vary greatly in each case. For example, you could suffer different injuries from colliding with a car door than you could if you were forced to swerve out in oncoming traffic.

Awards provided in the table above are based on the severity of injuries and what effect they have on a person’s quality of life. Amounts may vary on a case-by-case basis. Contact us directly if you would like a more accurate estimate regarding your personal injury claim.

You may ask what is a cyclist able to claim following a dooring accident that wasn’t their fault? As we have outlined above, compensation awards for personal injury claims are mainly based on the severity of your injuries, and the extent to which they affect your quality of life. It is possible for a cyclist hit by a car door to claim various damages relating to your injuries as well as any losses you incurred. As each case is different, not all of these may be a part of every claim, but  can include:

If you are considering a claim for injuries caused by being hit by a car door while cycling, it is advisable that you try to keep track of all expenditure related to your injury. Keeping receipts, prescription bills, medical bills and other financial documents are essential in making your claim stronger.

If you need any more information on making a claim, what you might be able to claim, or on collecting evidence to support a claim, contact us today for free no-obligation legal advice.

No Win No Fee Dooring Accident And Cyclist Injury Claims

If you choose to make your personal injury claim with us, your claim would be handled on a No Win No Fee basis. If you would like to know more about making a No Win No Fee claim, contact us today.

Choosing to work with a personal injury solicitor from our team means that you get a combined 30 years’ experience in handling personal injury and accident claims. If you were on your bicycle and were hit by a car door which caused you harm, our team could help you secure the highest possible compensation award for your injuries.

Our advice team offers free no-obligation legal advice to help you decide if you would like to pursue a No Win No Fee claim for your injuries. We are happy to answer all your questions, and give you open, accurate legal advice, Should you decide to work with us, we will keep you updated on the progress of your claim throughout the process.

Contact us today for advice regarding personal injuries caused when you were hit by an open car door. Our advisers are ready and waiting to take you call. You can reach us on 0800 073 8801. If you would like to schedule a call back from us, you can use our online contact form and enter a time of your choosing.

This is a guide for cyclists hit by car doors that are wishing to make a claim for compensation. To give you some extra information we have included some links below that you may find useful.

Accident Claims And Compensation Guide Specialists – See our main website a selection of other guides on accident claims you could make.

Staying Safe On The Roads

The Highway Code – See this government article for information on the rules for cyclists.